Apple users may be unable to go full screen, so they should click here for a bigger window.

The Greek Orthodox chapel commemorating Apostle Peter and St. Helen the Martyr is situated on Kerkiras Street, Paphos, Cyprus. The founding stone was placed by the Bishop of Paphos, Georgios IV, on Saturday 7th December 2013 and the project was completed on Sunday 19th July 2015.

The design was inspired by the typical forms of Byzantine architecture as well as the local Orthodox Church architecture.

There was a fair bit of information about the design on the University of Nicosia Website:
_____

The chapel typology belongs to the double-aisle vaulted orthodox temples. The building program includes a Narthex, a Nave, a side Aisle, a Sanctuary and a Prothesis. Morphologically, it is inspired by the local orthodox ecclesiastical architecture, while, through a series of innovative building methods and materials, it presents a contemporary example. As such, the entire chapel is formed by extruding a section along a longitudinal axis which results in a legible, lightweight and welcoming form. The east and west sides of the extruded form are left open providing covered spaces filtering daylight and views.  The interaction of the extrusion with the programmatic elements of the building creates complex moments and rich spaces within the shell. As such, the side aisle appears as a solid volume that communicates with the central Nave through a series of consecutive arches. On the east side, a semi-cylindrical, self-standing element hosting the sanctuary is inserted in the shell. On the west, vertical louvers, forming the bell-tower, provide shading for the entrance of the chapel while a large 5.5-meter-tall door allows the interior to be merged with the exterior. Finally, the landscape, identified by the almond trees complements the synthesis.

The chapel presented a design challenge as it called for innovation on a morphologically and structurally constrained building typology. The project abandons the traditional design methods by introducing a core collaborative approach within the design team to bridge complexity and affordability. As opposed to the standard design procedures, a body of multi-disciplinary data was gathered early on and employed throughout the entire duration of the project.  Architecture, structure and cost became parts of an integrated design process which was handled using high-end digital tools since the very early stages of the design.  These tools enhanced collaboration between individual disciplines and enabled the development of efficient construction workflows.

In terms of construction technology, the designers integrated existing and reinvented materials with high-end computational tools and methods to introduce new means of realizing complex forms.

The team specified the use of Ferrocement, a concrete based thin-wall composite used in the 60’s for constructing thin, free-form shell structures and floating vessels. Its lightweight nature and the formwork-free application rendered it appropriate for the above applications. An exceptionally thin, yet rigid, Ferrocement shell combined with a steel structural frame and reinforced concrete walls was successfully constructed, forming the composite structural system of the chapel. The integrated properties of the composite system enabled a shell thickness of as low as 70 mm, including thermal insulation. The combination with modern construction materials allowed Ferrocement to be re-considered as a competitive alternative in current complex construction applications.

Paphos Chat has been created for people who like our site and want to chat using Facebook. You can also easily upload photos of any size here. A lot of people are members of the Facebook chat group and the main forum. It's entirely up to you.

Planning a day out? Then use our map of blog locations as a handy guide. Some of the places we visit our closer to each other than you might think, so take a look and start planning your next adventure...

Let me take you on a journey around the region of Paphos, Cyprus. Starting at Paphos itself, we travel to Akoursos, then Kathikas, Kritou Terra and Simou. We continue past Lasa and Kannaviou, before taking in the delights of Panagia. Getting a bit more adventurous, we visit the abandoned villages of Statos and Agios Fotios, before passing through Choulou, Letymbou and Polemi, and rejoining the main Paphos - Polis road. The route is suitable for all types of vehicle, and requires no off-roading. The guide contains about 130 photographs including shots of all the road signs you need to pay attention to, as well as some of the highlights you may experience along the way. There are also several maps which will help you keep your bearings. You can do this journey in a day, or you can break it up into chunks. You can also do it in reverse, to get some completely different views. It is entirely up to you.

Newly published, our second Paphos Road trip takes you from coast to coast. Visit Coral Bay, Sea Caves, Agios Georgios, various traditional villages and more besides, as you travel to the Baths of Aphrodite on the Polis coast. And on the way back, we throw in an abandoned village for good measure. 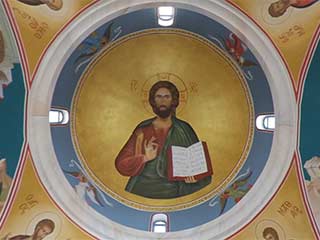 St Nicholas on the Geroskipou coast front, is a spectacularly adorned church. If you visit you will find a mix of curious tourists and religious locals, praying for their loved ones. 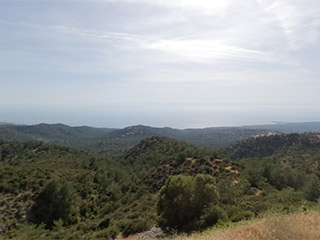 A view across the Akamas, looking out over Lara Bay and beyond. 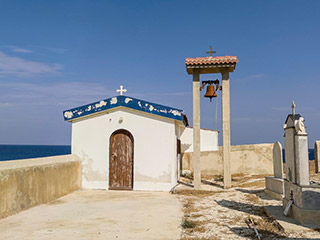 A beautiful little church in a surprising location. 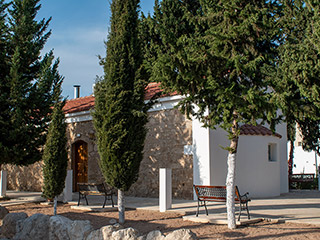 The Universal area of Paphos is under constant development. We visited a small church there recently, which arrived before the surrounding houses could be built. We were only passing through so we haven't spent much time on the tour. However, we are loving the results we are getting with the new camera. It looks awesome!